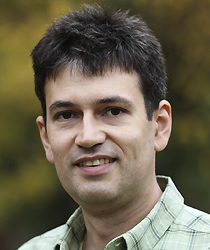 Tudor Dumitraș is an assistant professor in the Department of Electrical and Computer Engineering with a joint appointment in the University of Maryland Institute for Advanced Computer Studies. He is also a core faculty member in the Maryland Cybersecurity Center.

In his previous role at Symantec Research Labs he built the Worldwide Intelligence Network Environment (WINE)—a platform for experimenting with Big Data techniques. Dumitraș received an honorable mention in the NSA competition for the Best Scientific Cybersecurity Paper of 2012. He also received the 2011 A. G. Jordan Award from the ECE Department at Carnegie Mellon University, the 2009 John Vlissides Award from ACM SIGPLAN, and the Best Paper Award at ASP-DAC'03.

Dumitraș received his doctorate in electrical and computer engineering from Carnegie Mellon University.