Their research paper "Liquid drops attract or repel by the inverted Cheerios effect" could provide new insights into applications ranging from artificial tissue development and cancer therapy to 3-D printing and rheometry (quantification of the physical properties of a suspension or slurry flows or viscoelastic materials ) for soft materials.

While the interaction of drops on rigid surfaces is well known, researchers know very little about how surface tension and elasticity interplay to dictate the interaction of drops on soft surfaces (such as jelly). In this study, Das and his collaborators establish that on soft materials the liquid drops interact by an ‘inverted Cheerios effect,' which in turn, can be regulated to enforce that the droplets either move towards or away from each other.

We encounter the fascinating Cheerios effect every morning at our breakfast table. This effect refers to the “clumping up” of cereal floating on milk and water due to the interplay of the surface tension and gravitational forces. In the team's paper, they describe the drop-drop interaction as something that can be best described as an “Inverted Cheerios Effect." This “inversion” stems from the roles of the liquid and solid being reversed: in this case, liquid droplets interact while resting on solid soft material.

In recent years, the classic Cheerios effect has inspired a new set of manufacturing technologies for advanced materials and helped physicists understand the gravitational collapse of galaxies. Similarly, the newly discovered ‘inverted Cheerios effect’ may open up new opportunities in engineering and the life sciences.

These forces are illustrated in figure 1 and the video illustrates the phenomena. 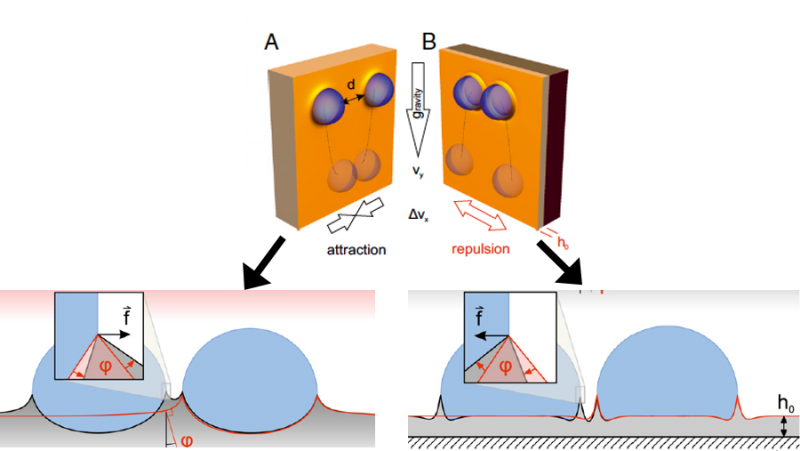 "The droplets deform the surface on which they live, and due to this deformation, they interact; somewhat reminiscent of general relativity, from which we know that galaxies or black holes interact by deforming space around them,” he explained. “What is remarkable about our case though, is the fact that the direction of the interaction can be tuned by the medium, without modifying the particles themselves."

“Cells are known to interact on soft surfaces and such interaction has been an important basis of tissue formation," added Das. "This soft-surface mediated drop-drop interaction will therefore be relevant in possible artificial tissue formation by regulating the inter-cellular interactions."

Das also noted that such drop-drop interactions on soft material could provide vital clues on applications such as the soft-surface-based arrest of spreading tumor cells for cancer treatment, the development of new micro-rheometry techniques for characterizing soft solid,  new designs of surfaces for engineering applications for “on demand” drop condensation and many more.

The team's work was also featured in the article "How scientists inverted the Cheerios effect" on Phys.org, one of the leading web-based science, research and technology news oulets.