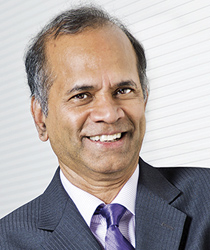 Prof. Rama Chellappa received the B.E. (Hons.) degree in Electronics and Communication Engineering from the University of Madras, India in 1975 and the M.E. (with Distinction) degree from  the Indian Institute of Science, Bangalore, India in 1977. He received the M.S.E.E. and Ph.D. Degrees in Electrical Engineering from Purdue University, West Lafayette, IN, in 1978 and 1981 respectively. he previously held a Minta Martin Professorship in the A.J. Clark School of Engineering and served as the Chair of the Electrical and Computer Engineering Department from 2011-2018.

Prior to joining the University of Maryland, he was an Assistant (1981-1986) and Associate Professor (1986-1991) and Director of the Signal and Image Processing Institute (1988-1990) with the University of Southern California, Los Angeles. Over the last 32 years, he has published numerous book chapters, peer-reviewed journal and conference papers. He has co-edited/co-authored books and research monographs on Markov random fields, gait analysis, face recognition, artificial neural networks and human action recognition. His current research interests are face and gait analysis, secure biometrics, 3D modeling from video, image/video exploitation from stationary and moving platforms, compressive sensing, hyper spectral processing, and commercial applications of image processing and understanding.

Prof. Chellappa served as an associate editor of four IEEE Transactions, as a co-Editor-in- Chief of Graphical models and Image Processing and as the Editor-in-Chief of IEEE Transactions on Pattern Analysis and Machine Intelligence. He also served as a member of the IEEE Signal Processing Society Board of Governors, as a Distinguished Lecturer and as its Vice President of Awards and Membership. He also served as the President of the IEEE Biometrics Council. He has received several awards, including an NSF Presidential Young Investigator Award, four IBM Faculty Development Awards, the 1990 Excellence in Teaching Award from School of Engineering at USC, the Society, Technical Achievement and Meritorious Service Awards from the IEEE Signal Processing Society and the Technical Achievement and Meritorious Service Awards from the IEEE Computer Society. He also co-authored two papers that were recognized as best industry-related paper and best student paper, respectively by the International Association of Pattern Recognition. In 2012, he received the K.S. Fu Prize from the International Association of Pattern Recognition.

At the University of Maryland, he was elected as a Distinguished Faculty Research Fellow, as a Distinguished Scholar-Teacher and received the Outstanding Invention Award from the Office of technology Commercialization. He is a recipient of the Faculty Outstanding Research Award and the Poole and Kent Teaching Award from the Senior Faculty from the College of Engineering and an Outstanding GEMSTONE Mentor Award.  In 2010, Purdue University recognized him with an Outstanding ECE award. He is a Fellow of the IEEE, the International Association for Pattern Recognition, the Optical Society of America and the American Association for the Advancement of Science. He has served as a General and Technical Program Chair for several IEEE international and national conferences and workshops and is a Golden Core Member of IEEE Computer Society. He holds four patents.

IEEE Fellow is a distinction reserved for select IEEE members whose extraordinary accomplishments in any of the IEEE fields of interest are deemed fitting of this prestigious grade elevation.

Patel is currently an assistant professor in the Department of Electrical and Computer Engineering at the Johns Hopkins University.

Peri's research interests are in computer vision and machine learning.