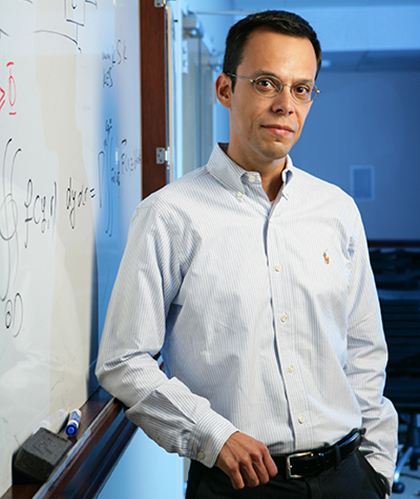 Nuno C. Martins graduated with a M.S. degree in Electrical Engineering from I.S.T., Portugal, in 1997, and a Ph.D. degree in Electrical Engineering and Computer Science with a minor in Mathematics from Massachusetts Institute of Technology (MIT), Cambridge, in 2004. He has also concluded a Financial Technology Option program at Sloan School of Management (MIT) in 2004.

He is Professor of Electrical Engineering in the Electrical and Computer Engineering Department of the University of Maryland, where he also holds a joint appointment with the Institute for Systems Research. He was Director of the Maryland Robotics Center from 2012 until 2014.

He served as Associate Editor for Systems and Control Letters (Elsevier), Automatica and the IEEE Control Systems Society Conference Editorial Board. He was also a program Vice-Chair for the IEEE Conference on Decision and Control in 2013 and 2014.

Prof. Martins received the 2006 American Automatic Control Council O. Hugo Schuck Award, a National Science Foundation CAREER Award in 2007, the 2008 IEEE CSS Axelby Award for the best paper in the IEEE Transactions on Automatic Control, the 2010 Outstanding ISR Faculty Award, the 2010 George Corcoran Award from the ECE Department / UMD and he was an UMD/ADVANCE Leadership Fellow in 2013.

The new paper will appear in IEEE Control Systems Letters.

The former student of Nuno Martins will be an ECE assistant professor.

The award recognizes the best papers presented at the American Control Conference.

Nuno Martins is developing systems and procedures for managing strategic options and actions related to traffic in natural disasters and other extreme events.

Ahmadi, who earned a 2006 BS in electrical engineering and math, is a professor at Princeton University.