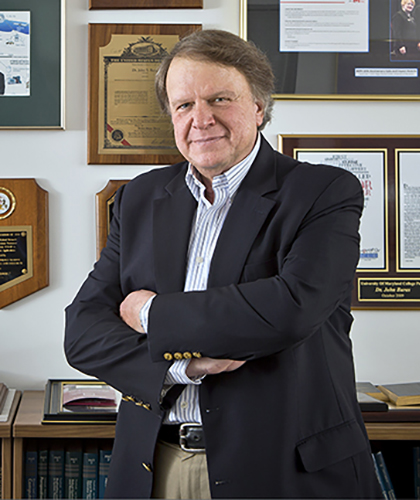 He is a IEEE Life Fellow, SIAM Fellow, AAAS Fellow, NAI Fellow, IFAC Fellow, AMS Fellow, AIAA Fellow, Member of the National Academy of Inventors (NAI) and a Foreign Member of the Royal Swedish Academy of Engineering Sciences (IVA). Major honors and awards include the 1980 George Axelby Award from the IEEE Control Systems Society, the 2006 Leonard Abraham Prize from the IEEE Communications Society, the 2014 Tage Erlander Guest Professorship from the Swedish Research Council, and a three year (2014-2017) Senior Hans Fischer Fellowship from the Institute for Advanced Study of the Technical University of Munich, Germany. In 2016 he was inducted in the University of Maryland A. J. Clark School of Engineering Innovation Hall of Fame. He was awarded the 2017 Institute for Electrical and Electronics Engineers (IEEE) Simon Ramo Medal, the 2017 American Automatic Control Council (AACC) Richard E. Bellman Control Heritage Award, and the 2018 American Institute for Aeronautics and Astronautics Aerospace Communications Award. In June 2018 he was awarded a Doctorate Honoris Causa by his alma mater the National Technical University of Athens, Greece.

He has coauthored more than 1,000 technical papers in refereed journals and conferences, one book (Path Problems in Networks, 2010), co-edited three others, with 15,587 Google Scholar citations and an h-index of 55. He has given many plenary and keynote addresses in major international conferences worldwide. He has educated 91 doctoral students, 120 MS students and has mentored 70 postdoctoral fellows. He has been the initial architect and continuing innovator of the pioneering MS on Systems Engineering Program of the ISR. His research interests include systems and control, optimization, communication networks, applied mathematics, machine learning, artificial intelligence, signal processing and understanding, robotics, computing systems, network security and trust, systems biology, healthcare management systems, model-based systems engineering. He has been awarded nineteen patents and has been honored worldwide with many awards as innovator and leader of economic development.

Institute of Electrical and Electronics Engineers, 1984

Society for Industrial and Applied Mathematics, 2014

American Association for the Advancement of Science, 2015

American Institute of Aeronautics and Astronautics, 2020

1971, Ch. Chrysovergis Award, awarded by the Senate of the National Technical University of Athens, to the outstanding graduating student from the Department of Electrical Engineering

1991, Outstanding Invention of the Year Award, from the University of Maryland, for the invention of a “Low Complexity CELP Speech Coder”

1994, Outstanding Invention of the Year Award , from the University of Maryland, for the invention of “A System Design for a Hybrid Network Data Communications Terminal Using Asymmetric TCP/IP to Support Internet Applications”

1995, Award for Outstanding Performance , for Analysis, Engineering and Implementation of a Novel, Actively Controlled Toolpost for High Precision Machining, from the Smart Materials and Structures DARPA Partnership Team, led by Martin Marietta Corporation.

1995, Outstanding Contributions to Seniors Award, from the Vice President for Student Affairs and the Senior Council, University of Maryland.

1998, Mancur Olson Research Achievement Award, from the University of Maryland College Park, award honors faculty whose research achievements have been extraordinary over a long time period.

1999, Finalist in the Invention of the Year Competition for 1998, University of Maryland College Park, for the invention “A Method for Distributed Shared Key Generation Using Fractional Keys”

2004, Best Paper Award, presented at the ACM Workshop on Wireless Security, WiSe ’04, for the paper “Trust Evaluation in Ad-Hoc Networks”.

2006, Elected as a Foreign Member of the Royal Swedish Academy of Engieering Sciences (IVA), IVA is the world’s oldest engineering academy. Its mission is to promote the engineering and economic sciences and the development of industry for the benefit of society.

2008, Outstanding Invention of the Year Award , from the University of Maryland, for the invention of “Method and Implementation for Key Generation and Replacement using Markov Models”.

2009, Maryland Innovator of the Year Award, from the Maryland Daily Record, for the invention “Method and Implementation for Key Generation and Replacement using Markov Models”

2012, Award for "Principal Investigator with Greatest Impact", one of the two most significant awards bestowed for Research at the Maryland Industrial Partnerships Program (MIPS) 25th Anniversary Gala Celebration

2012, The Largest Selling Product, the other one of the two most significant awards bestowed for Research at the prestigious three year (2014-2017) Maryland Industrial Partnerships Program (MIPS) 25th Anniversary Gala Celebration. Award was given for HughesNet®, the product which resulted from Dr. Baras’ collaboration with Hughes Network Systems. HughesNet® is the largest-selling product ever developed with the help of the MIPS program. Dr. Baras created the algorithms by which the Internet is delivered over satellite worldwide.

2013, 2013 Jimmy Lin Award for Entrepreneurship, awarded by the Electrical and Computer Engineering Department, University of Maryland, for the business model "Secure Mobile Devices", (with Vladimir Ivanov)

2014 to 2017, The prestigious three year (2014-2017) "Hans Fischer Senior Fellowship", by the Institute for Advanced Study of the Technical University of Munich (TUM), Munich, Germany

2014 , American Association for the Advancement of Science (AAAS) Fellow, “for distinguished contributions to the fields of systems and control, communication networks, network security, and leadership in establishing outstanding cross disciplinary research and education programs.”

2016, 2017 International Federation for Automatic Control (IFAC) Fellow, for contributions to the theory and applications of stochastic systems and control and communication networks and for leadership in cross-disciplinary research and education

2016, 2017 IEEE Simon Ramo Medal, For exceptional contributions to the conception and commercialization of internet-over-satellite systems, and for leadership in model-based engineering, systems science, and engineering research.

2016, Inducted in the A. James Clark School of Engineeting Innovation Hall of Fame, for his outstanding contributions to Internet over satellite technology and hybrid networks, which has enabled broadband Internet services over interoperable satellite and terrestrial networks. | remarks |

2019, Fellow of the American Mathematical Society for contributions to the mathematical foundations and applications of systems theory, stochastic systems, stochastic control, network security and trust, mentoring and academic leadership

2020, Fellow of the American Institute of Aeronautics and Astronautics for fundamental and high impact contributions to Internet over satellite technology, cybersecurity, automatic control, model-based systems engineering, and for academic leadership.

Award recognizes alumni who have made significant and meritorious contributions to their fields.

Simington participated in a CTIA meeting on 5G security and test bed tour hosted by ISR.