Dr. Ghodssi's research interests are in the design and development of microfabrication technologies and their applications to micro/nano devices and systems for chemical and biological sensing, small-scale energy conversion and harvesting. At Wisconsin, his Ph.D. thesis was focused on development of a high aspect ratio microfabrication process for an electrostatic driven MEMS device using x-ray lithography and LIGA technology. At MIT, he developed the building block MEMS fabrication technologies for a microturbine generator device, and also served as an Assistant Director on that project. At Maryland, his research group has pioneered the development of next generation PowerMEMS devices supported on micro-ball bearing, MEMS-based gray-scale technologies and the use of novel III-V optical MEMS devices and systems for chemical and biological detection.

Dr. Ghodssi's research has been funded by Army Research Lab (ARL), Department of Energy (DoE)National Science Foundation (NSF), Laboratory for Physical Sciences (LPS), NASA Goddard Space Flight Center (GSFC), National Institute of Standards and Technology (NIST) and R.W. Deutsch Foundation. He has served as a program co-chairman for the 2001 International Semiconductor Device Research Symposium (ISDRS) and as a chairman of the "MEMS and NEMS Technical Group" at the American Vacuum Society (AVS) from 2002 to 2004. Dr. Ghodssi was chair of the 9th International Workshop on Micro and Nanotechnology for Power Generation and Energy Conversion Applications(PowerMEMS 2009) and served as the Americas Technical Program Committee chair of IEEE SENSORS 2010, 2011 and 2012. He has chaired the committee for the Denice Denton Emerging Leader Award sponsored by Microsoft and the Anita Borg Institute for Women and Technology (ABI) since 2007.

Dr. Ghodssi has more than 95 scholarly publications, is the co-editor of the MEMS Materials and Processes Handbook published in 2011, and is an associate editor for the Journal of Microelectromechanical Systems (JMEMS) and Biomedical Microdevices (BMMD). Dr. Ghodssi has received the 2001 UMD George Corcoran Award, the 2002 National Science Foundation CAREER Award, and the 2003 UMD Outstanding Systems Engineering Faculty Award. He was among 100 of the nation's outstanding engineers invited to attend the National Academy of Engineering (NAE) U.S. Frontiers of Engineering Symposium in 2007 and the National Academy of Engineering (NAE) EU-U.S. Frontiers of Engineering Symposium in 2010. Dr. Ghodssi is the co-founder of MEMS Alliance in the greater Washington area and a member of the IEEE, AVS, MRS, ASEE and AAAS societies.

For more information about the Distinguished Scholar-Teacher Award program, as well as a list of past winners, please visit: http://www.faculty.umd.edu/FacAwards/dstlist.html. 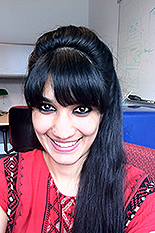