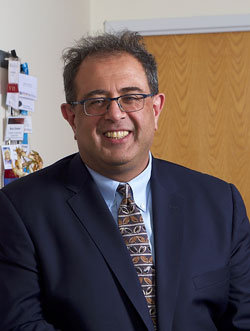 Reza Ghodssi is the Herbert Rabin Distinguished Chair in Engineering and Director of the MEMS Sensors and Actuators Lab (MSAL) in the Department of Electrical and Computer Engineering (ECE) and the Institute for Systems Research (ISR) at the University of Maryland (UMD). He is also affiliated with the Fischell Department of Bioengineering (BIOE), the Robert E. Fischell Institute for Biomedical Devices (Fischell Institute), the Maryland NanoCenter, the Maryland Energy Innovation Institute (MEII), and the Department of Materials Science and Engineering (MSE) at UMD. Dr. Ghodssi's research interests are in the design and development of micro/nano/bio devices and systems for chemical and biological sensing, small-scale energy conversion and harvesting with a strong emphasis toward healthcare applications.

Dr. Ghodssi was director of the Institute for Systems Research (ISR) for eight years (2009-2017). During this time, he launched a number of interdisciplinary initiatives aimed at enhancing the impact of ISR research efforts on society while building a more interactive faculty, staff and student community across different disciplines in the institute. These efforts include the launch of the Maryland Robotics Center (MRC) targeted at advancing robotic systems, underlying component technologies, and applications of robotics through research and educational programs that are interdisciplinary in nature and based on a systems approach. Dr. Ghodssi is the founding co-director of the Brain and Behavior Initiative (BBI) aiming at revolutionizing the interface between engineers and neuroscientists by generating novel tools and approaches to understand complex behaviors produced by the human brain. Dr. Ghodssi’s continuous efforts in reaching out to alumni and industry colleagues resulted in a large number of industry-sponsored monthly seminar series as well as annual fellowships for graduate students and post-doctoral associates to attend conferences and an active industry-oriented mentoring ecosystem in the Systems Engineering Education program in the institute. Dr. Ghodssi served as the President-elect of the Transducer Research Foundation (TRF) from 2020 until 2022. Since June 2022, he has been serving as the new President of TRF. The TRF is a nonprofit organization in the United States whose mission is to stimulate research in science and engineering, with emphasis on technologies related to transducers, microsystems, and nanosystems, and to foster the exchange of ideas and information between academic, industrial, and government researchers.

Dr. Ghodssi's research has been funded by the National Institutes of Health (NIH), Army Research Office (ARO), National Science Foundation (NSF), and R.W. Deutsch Foundation. He served as a chairman of the MEMS and NEMS Technical Group at the American Vacuum Society (AVS) from 2002 to 2004. Dr. Ghodssi also served as the Technical Program Committee chair for the 2020 Solid-State Sensors, Actuators, and Microsystems Workshop (Hilton Head 2020) and the General Chair for the Hilton Head Workshop in 2022 (Hilton Head 2022). He was chair of the 9th International Workshop on Micro and Nanotechnology for Power Generation and Energy Conversion Applications (PowerMEMS 2009) and the 2012 NSF Workshop on Micro, Nano, Bio Systems. He also served as the Americas Technical Program Committee chair of IEEE SENSORS 2010, 2011 and 2012. He chaired the committee for the Denice Denton Emerging Leader ABIE Award sponsored by the Anita Borg Institute for Women and Technology (ABI) and Microsoft from 2007 until 2016. Dr. Ghodssi was also the lead organizer and chair of the inaugural Denice Denton Emerging Leaders Workshop 2016 held in Madison, Wisconsin, focused on helping mid-career faculty (women and men) develop knowledge, skills, strategies, and critical networks.

Dr. Ghodssi is a University of Maryland Distinguished Scholar-Teacher, a Fellow of IEEE, AVS, and ASME, has over 160 journal publications and 349 refereed conference papers, and is the co-editor of the MEMS Materials and Processes Handbook published in 2011. He is an associate editor for the Journal of Microelectromechanical Systems (JMEMS) and Biomedical Microdevices (BMMD). He has obtained eight U.S. patents, with another ten pending. Dr. Ghodssi received the 2001 UMD George Corcoran Award, the 2002 National Science Foundation CAREER Award, and the 2003 UMD Outstanding Systems Engineering Faculty Award. He was among 100 of the nation's outstanding engineers invited to attend the National Academy of Engineering (NAE) U.S. Frontiers of Engineering Symposium in 2007 and the National Academy of Engineering (NAE) EU-U.S. Frontiers of Engineering Symposium in 2010. Dr. Ghodssi was the co-founder of the MEMS Alliance in the greater Washington area and is a member of the MRS, ASEE and AAAS societies.

Design and development of microfabrication technologies and processes in micro/nano/bio devices and systems for chemical and biological sensing, small- scale energy conversion and harvesting with a strong emphasis toward healthcare applications.

He will lead Clark School research, partnership and outreach activities in Southern Maryland.

Awards recognize outstanding students in the final stages of their dissertation work.

After its successful launch Dec. 25, Webb is well on its way to full deployment and the start of its mission.

The paper describes a micro-needle platform being developed for an ingestible capsule.