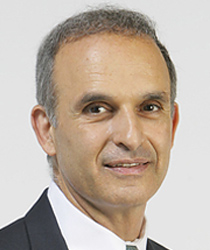 Joseph JaJa holds a joint appointment in the Department of Electrical and Computer Engineering, and the University of Maryland Institute for Advanced Computer Studies (UMIACS). He received his Ph.D. in Applied Mathematics from Harvard University in 1977. Dr. JaJa has published extensively in a number of areas including parallel and distributed computing, combinatorial optimization, algebraic complexity, VLSI architectures, machince learning, and data science. He has received numerous awards including the IEEE Fellow Award in 1996, the 1997 R&D Award for the development of software for tuning parallel programs, and the ACM Fellow Award in 2000, . He served on several editorial boards, and is currently serving on the advisory boards for several conferences and workshops.

Chakrabarti has received the award for excellence in research, teaching, and community service.

Standing with our Asian-American Community

The selection committee selected Mogul as being one of the most innovative educators in the Clark School.

At Maryland, Deepak Sherlekar was co-advised by Electrical and Computer Engineering Professor and Chair, Joseph JaJa.