This summer, on Monday, August 8 through Friday, August 12, students from St. Mary’s, Charles and Calvert counties came to the Southern Maryland Autonomous Research and Technology (SMART) building on the University System of Maryland at Southern Maryland campus for a STEM summer camp. Dr. Danilo Romero organized the camp, which focused on electrical and mechanical engineering. Dr. Romero is a Senior Lecturer in the Department of Electrical and Computer Engineering, and the Director of the Electrical Engineering Program at USMSM. 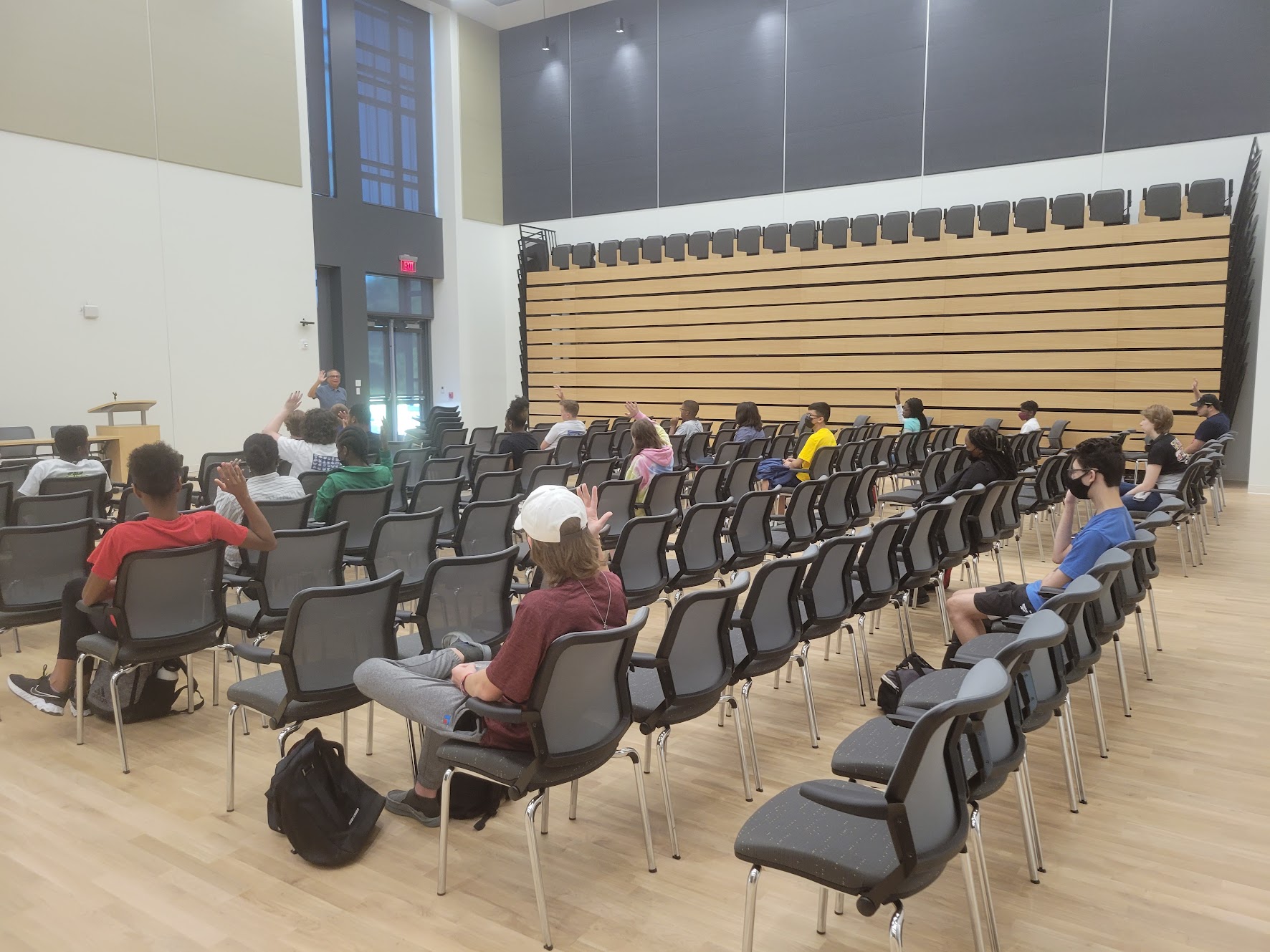 “We created the summer camp program to expose the young students at Southern Maryland to the STEM fields of studies,” Dr. Romero said. “We also want them and their parents to become aware of great educational opportunities that are offered at USMSM, the SMART building, and research in the MATRIX.” 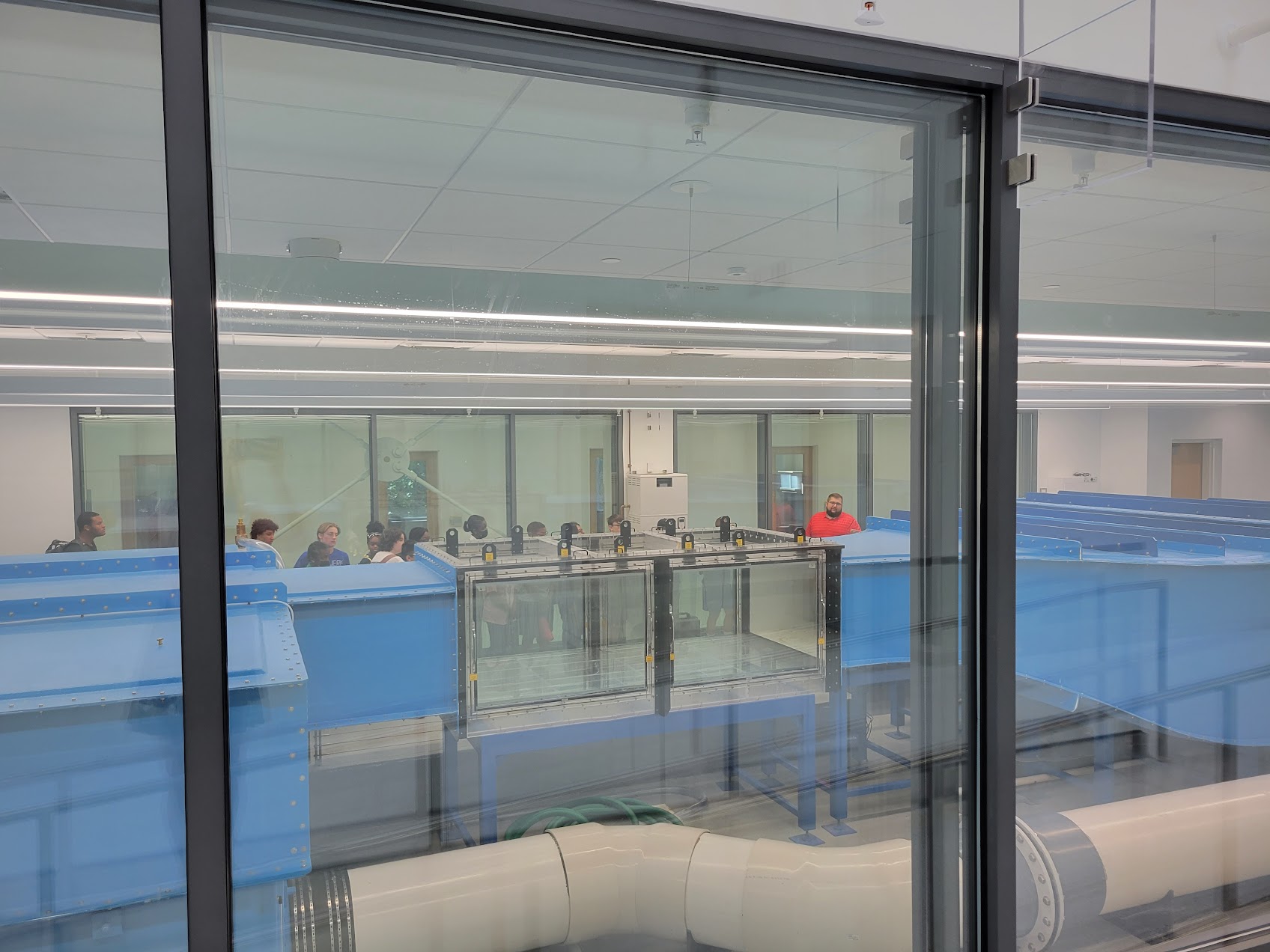 On the first day, the Maryland Autonomous Technologies Research Innovation and eXploration (MATRIX) Research Lab Manager Joe Copenhaver took the students on a tour of the SMART building and MATRIX lab. Students got to see the various labs and workshops, which are open for research and teaching.

On the first two days of the camp, Dr. Romero divided the students into two groups. On each day, one group worked on 3-D printing while the other group worked on basic microelectronics and coding using Arduino.

The students used the project assembly room of the MATRIX Lab for their 3D-printing projects. One basic skill that they learned is how to use the design and manufacturing software, Fusion 360, to build their project for 3-D printing. Mechanical Engineering students Ryan Gerbes and Emmanuel George taught those lessons. 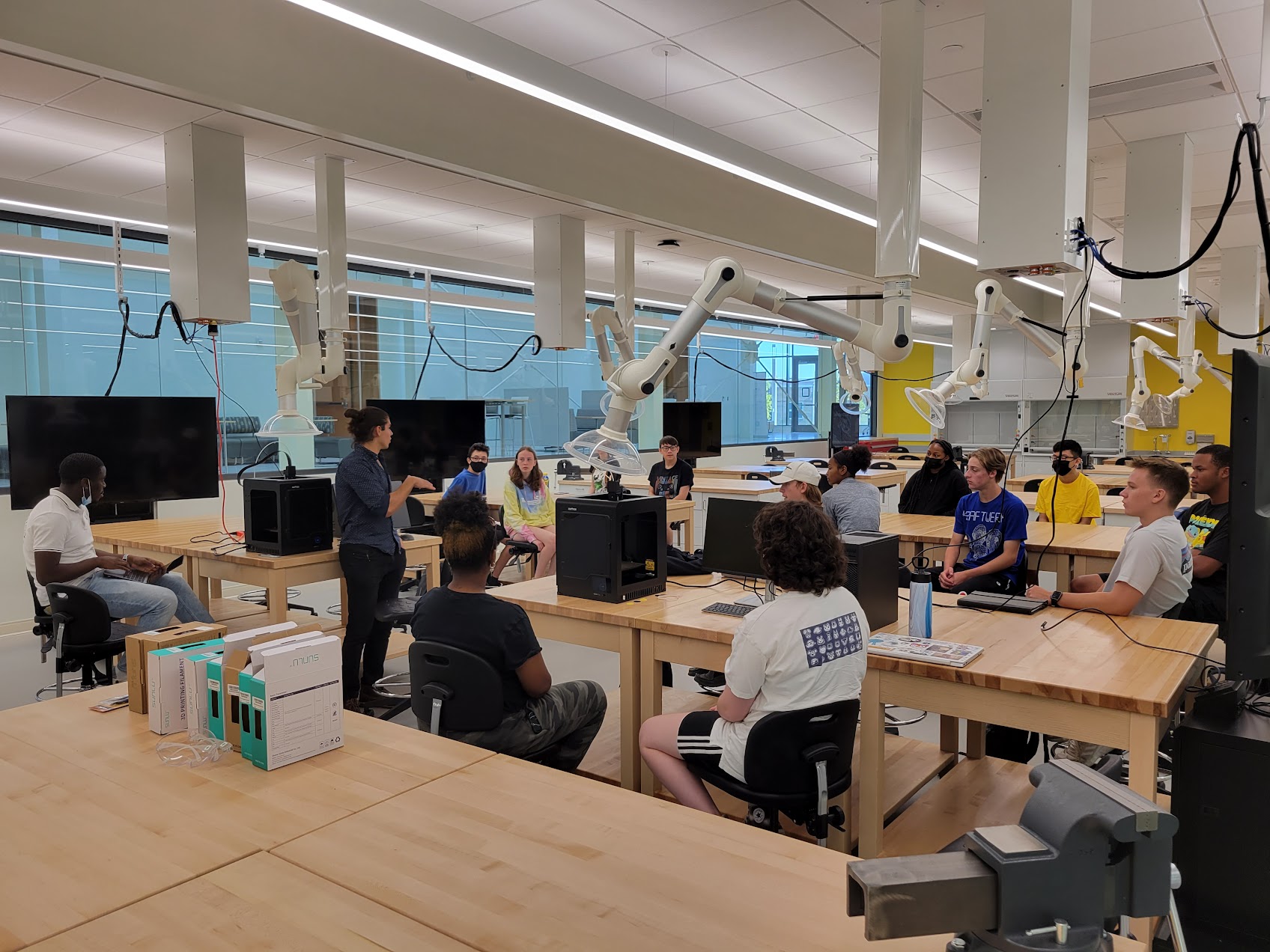 “I’ve always enjoyed teaching,” Ryan said. “I was really excited for a chance to help these students discover something they’re passionate about and inspire the next generation of engineers.”

The students designed and 3-D printed isometric shapes, along with their own creations including a rocket, a butterfly, and a (miniature) house.

“3-D printing was my favorite part because I had never done anything like that before,” said Connor, a 10th grader at Northern High School in Calvert County. “It was cool to create something and then watch it be made.”

Connor says his older brother did a similar camp in high school and ended up completing a UMD Southern Maryland program in Mechanical Engineering. He interned for NAVAIR and now is a full time engineer on base. 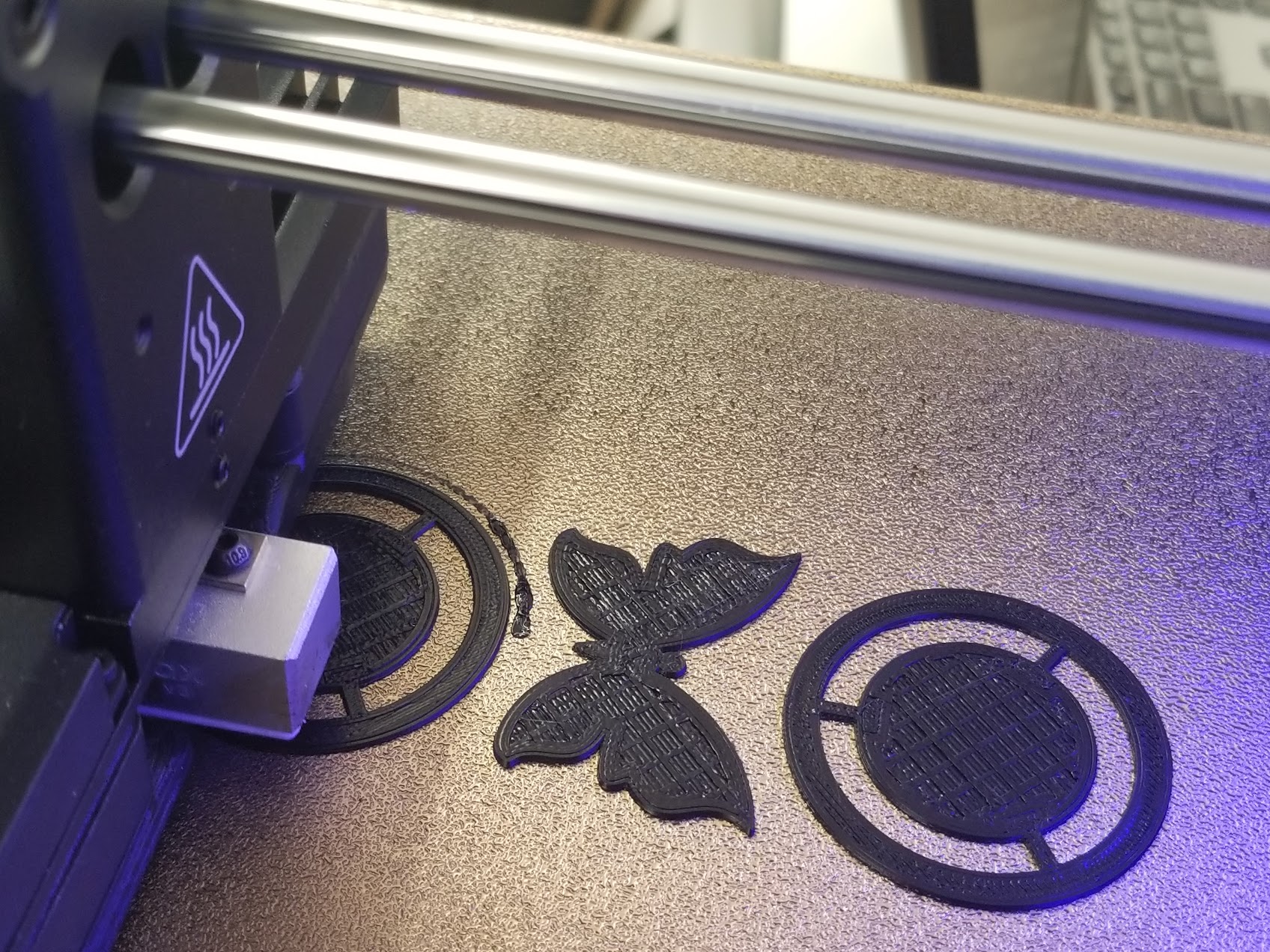 “The smile on their faces when they finished their parts and got to hold the real-life 3-D model they created was awesome,” Ryan said. “As a young person interested in this stuff, just believing you can do it can completely change their mindset and launch them into the career they’re dreaming of, no matter how challenging it might seem.”

The Arduino class was held in one of the classrooms in the SMART Building. Here, the students learned how to breadboard microelectronic circuits and how to control these circuits using software (coding). They learned how to use libraries, and they learned the rudiments of C++ programming language. Natalie Leveque, a junior computer engineering student at UMD, wrote the majority of the Arduino curriculum. 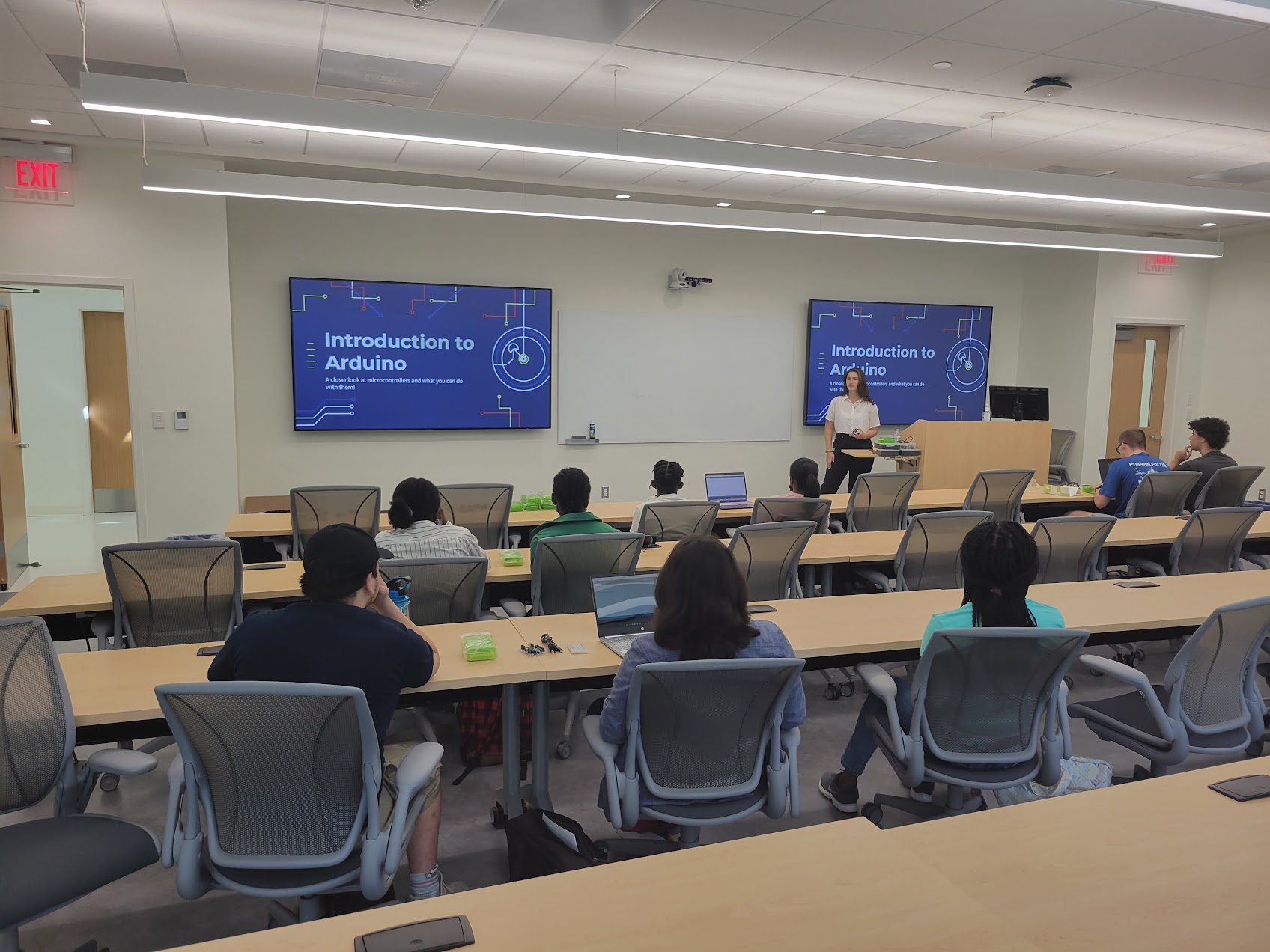 “I spent a couple weeks learning the individual software and hardwares on my own before doing so,” Natalie said. “Arduino can be thought of as a small computer. It can take a bunch of different inputs, from sensors or other electronic components, and it can produce a lot of different outputs.” Natalie started the lesson with some programming basics that are crucial no matter what language you’re working in, like control structures, functions, and variables, and then moved on to programming. 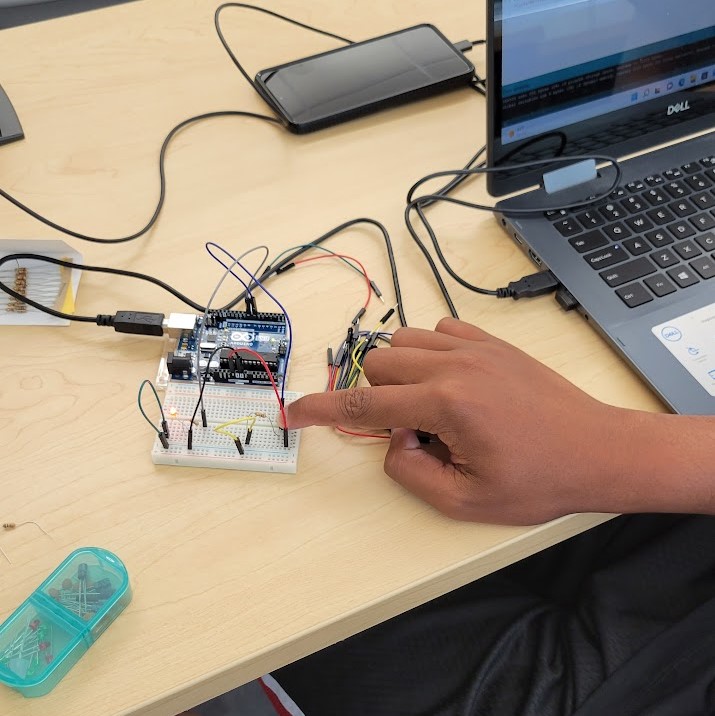 The students created light (using light-emitting diodes) and produced sounds (with a photoresistor and piezoelectric buzzer). Most importantly, they saw first hand how coding enables the control of the hardware to perform a certain task.

“I had them build circuits, and they used the concepts they learned to program the circuits,” Natalie said. “We used some cool sensors and output devices in the camp, like an LCD display that the students used to print their own messages to, or a buzzer that can play a tune.” 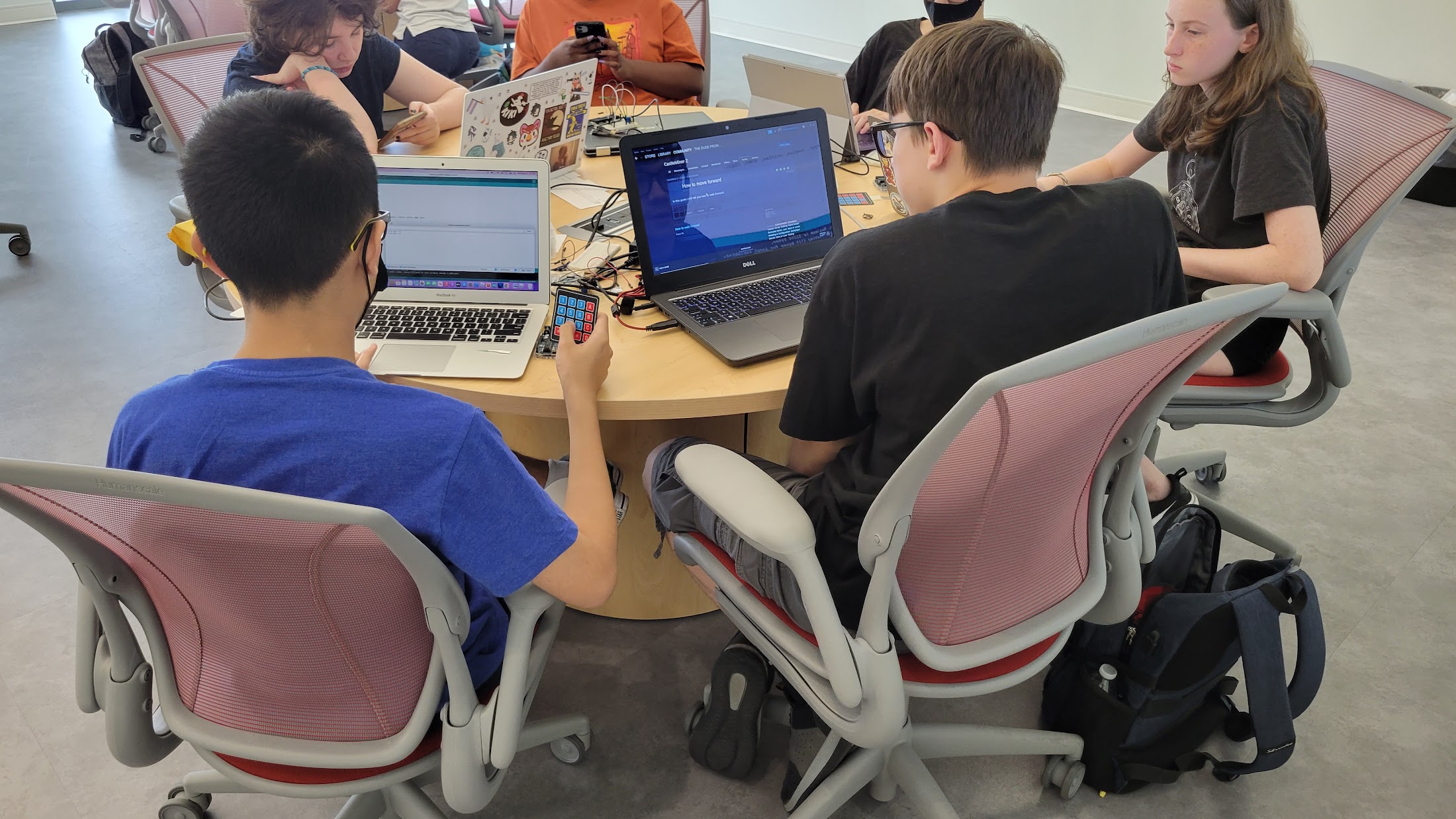 On the third day, the groups combined for some more complex Arduino projects. The students worked on a more complicated task: how to design electronic calculators.

“The goal was to get the kids comfortable with programming, and to show them different ways it can be used,” Natalie said. “I could tell that some kids definitely got excited about technology, and I hope they continue to pursue this passion in the future.”

They started off with a number pad, and coded ways to make it add, subtract, and multiply.

During the first half of the fourth day, the group focused on learning how to use the MIT App Inventor.

“This is a free website that isn’t super high tech, so it’s easy for beginners in computer science to get started with building cool apps,” Natalie said. 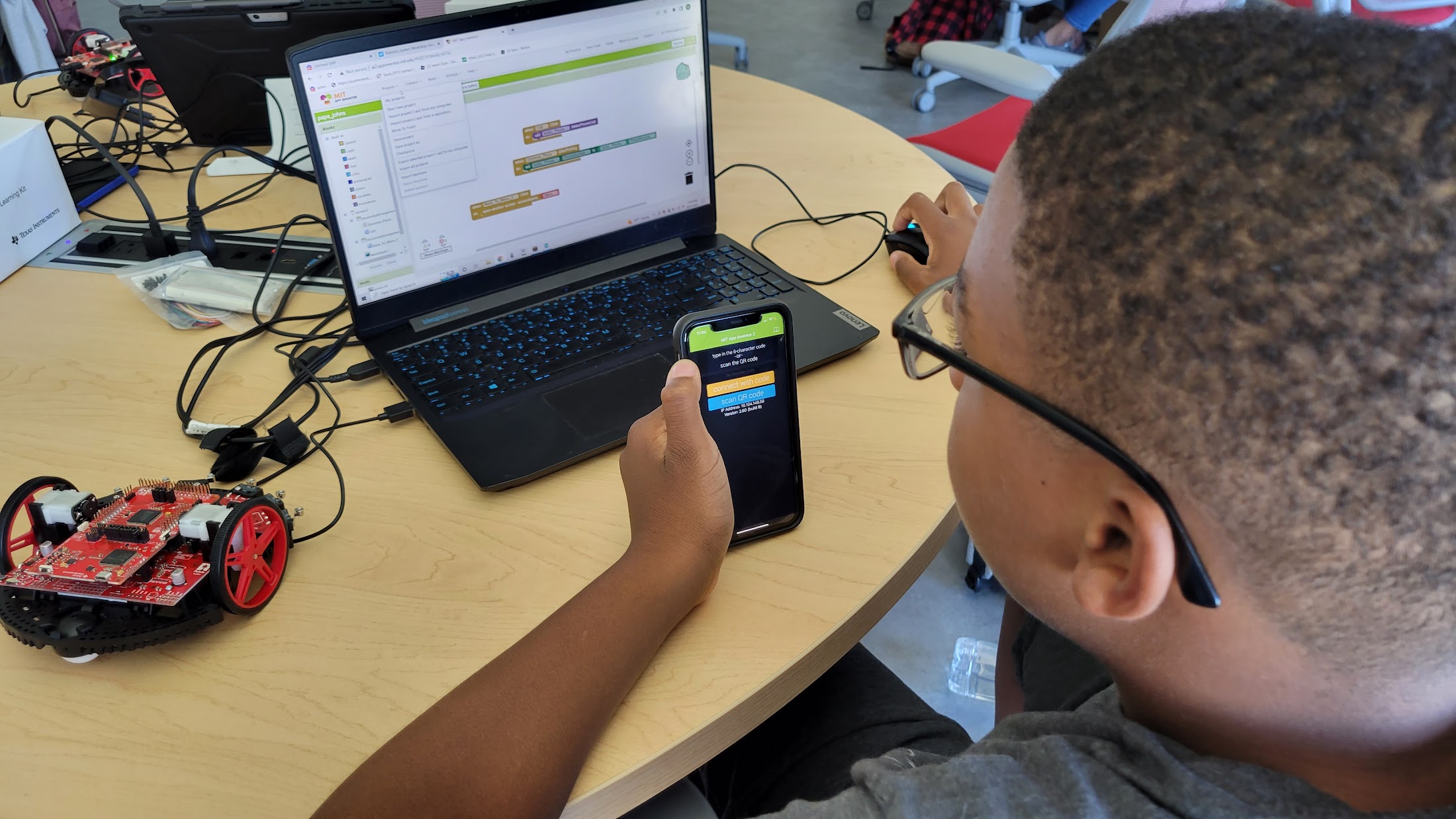 The students were allowed to design and create their own apps. One student made an app to order pizza, which was used to order Friday's lunch.

During the second half, they created more project assembly designs and 3-D printed them. 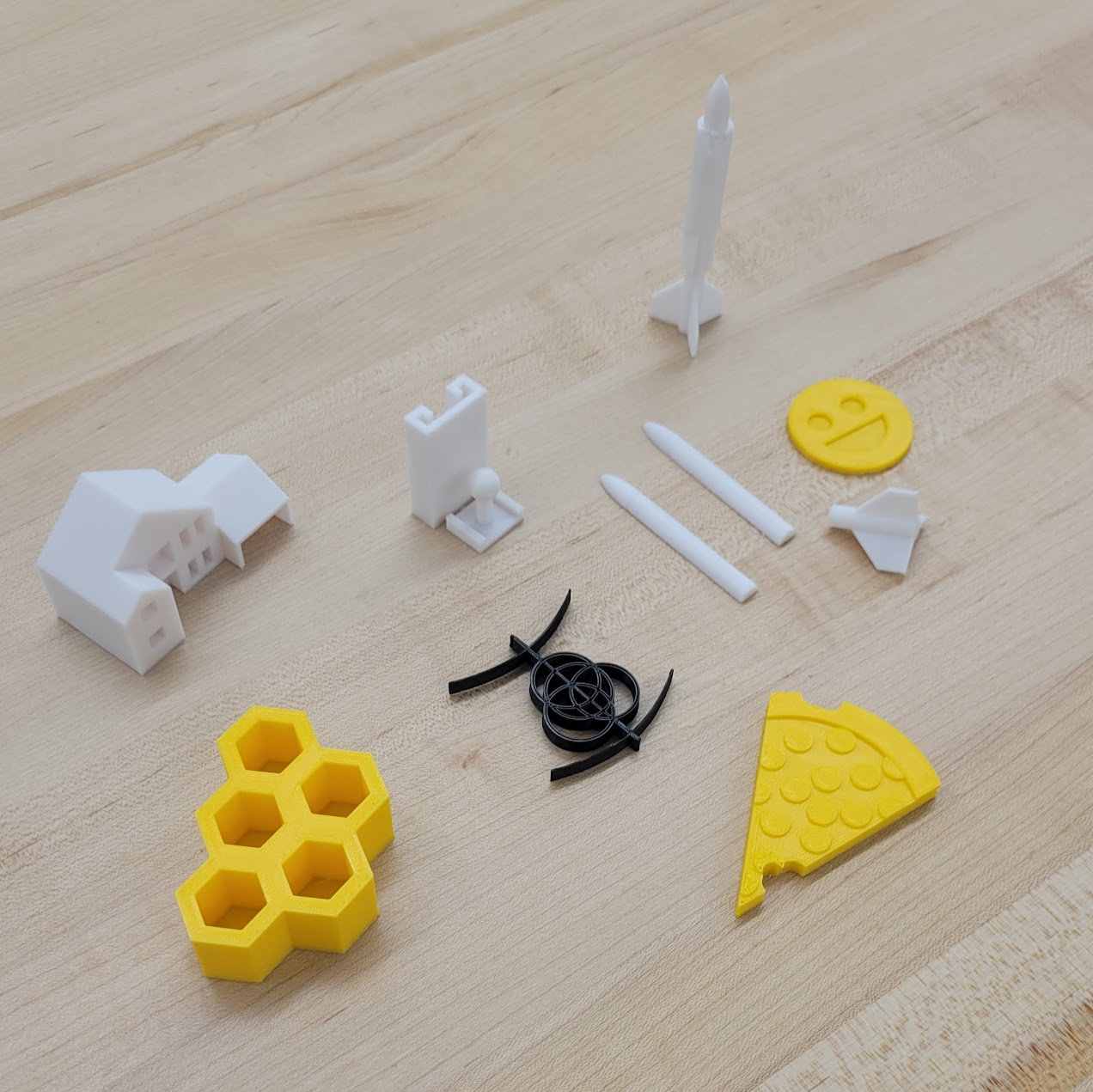 “We started off by creating a tutorial to familiarize the students with the basic tools Fusion 360 offers, and then challenged them to create a couple of parts we designed using these tools at a more intermediate level,” Ryan said. “It was great to see the students thinking about how to approach these problems, and talking to them one-on-one about how they might approach solving it, like a puzzle.”

The basics of 3-D design is just the start. Ryan says advancements in materials have allowed custom designed and easily interchangeable prosthetics. 3-D printing in zero gravity could mean astronauts could print tools and parts aboard the International Space Station. On an even larger scale, companies like SQ4D are creating construction-grade printers capable of 3D printing houses. 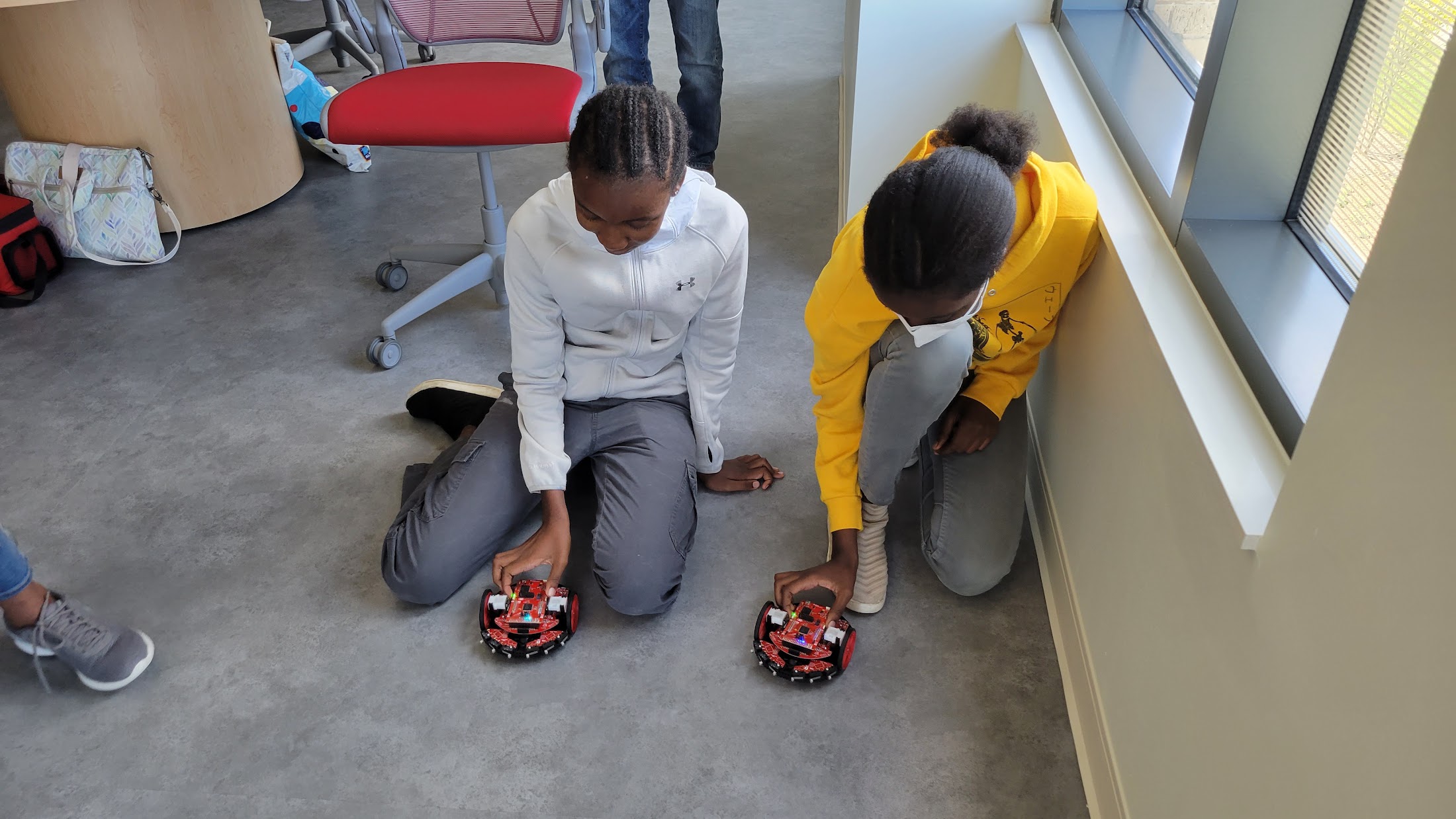 The last day, the group worked with TI-RSLK (Texas Instruments Robotic System Learning Kit) cars. The Patuxent Partnership bought the kits and donated them for the lesson. The group programmed the cars to start and stop. They could also set the direction and speed.

“The highlights were definitely when I could see that the kids were learning, and that they actually enjoyed and could implement the things that I was teaching them,” Natalie said. “Seeing them experiment with the electronics concepts and try to implement their own ideas was very exciting.” 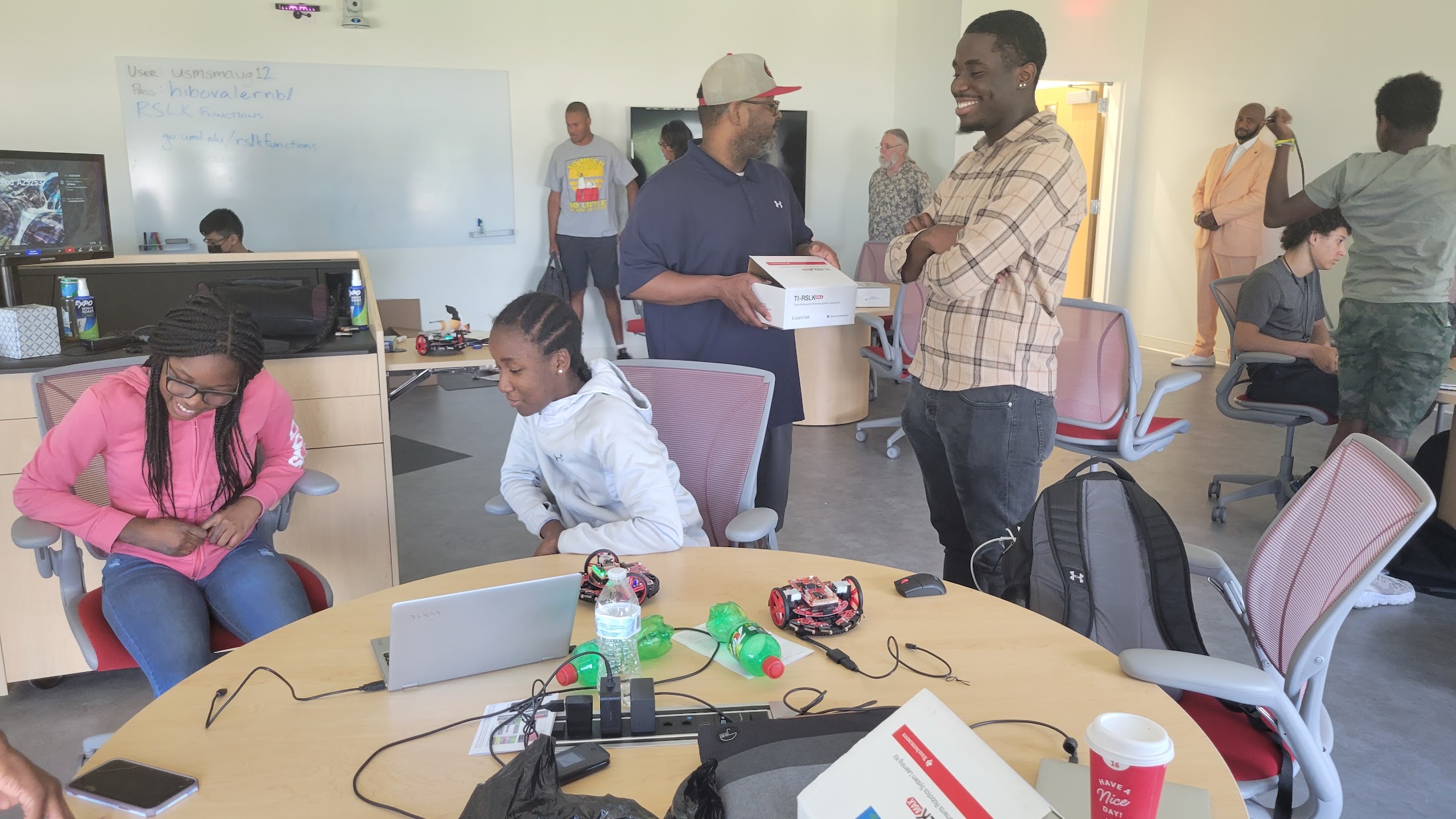 The parents came to watch the final result, a dozen robots dancing on the floor together.

“I was hoping it would expose the kids to various aspects within the field of engineering and spark an interest as a possible career choice,” Brenda said. “The camp was well-organized and the activities were interesting to my son.”

Dr. Romero plans to hold the camp again next year, with the final project being a robot competition.

“We want to create interests among the young participants in the STEM fields, for them to learn how math, science, and technology are used to solve problems,” Dr. Romero said.

“Now that these students have a pretty good understanding of the basics, I’d love to see what else we could do in the future,” Ryan said.