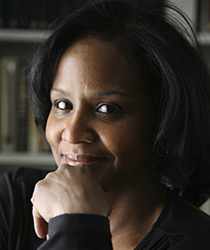 Carol Espy-Wilson is a Professor in the Electrical and Computer Engineering Department and the Institute for Systems Research at the University of Maryland. View or download Dr. Espy-Wilson's CV here.

Her company, OmniSpeech, translated research in her lab on noise suppression and speech enhancement to technology that improves speech-enabled technology in any device, app or platform.

Dr. Espy-Wilson has authored or coauthored numerous papers in journals, conference proceedings and books. She is a Fellow of the International Speech Communication Association (ICSA) and the Acoustical Society of America (ASA) and a Senior Member of IEEE. She was a Radcliffe Fellow at Harvard 2008–2009. Among the other honors and awards she has received for her research contributions are the Clare Boothe Luce Professorship in 1990, the Independent Scientist Award from the National Institutes of Health in 1998 and the Honda Initiation Award in 2003. She served as the chair of the Speech Technical Committee of the Acoustical Society of America (2007-2010) and as an Associate Editor of the ASA's magazine, Acoustics Today. She was a member of the National Advisory Board for Medical Rehabilitation at the National Institutes of Health. Currently, she is a member of the Advisory Council for the NIH National Institutes on Biomedical Imaging and Bioengineering and an Associate Editor of the Journal of the Acoustical Society of America. In 2019 she chaired the NSF Speech for Robotics Workshop.

The IEEE Grade of Fellow is conferred by the IEEE Board of Directors upon a person with an outstanding record of accomplishments in any of the IEEE fields of interest.

Rock on for John this October.

With machine learning, Carol Espy-Wilson is developing a phone app that can measure depression symptoms using speech and video cues.

Espy-Wilson has served as a pioneer, role model and mentor, especially for African-American women in the sciences.