Electrical and Computer Engineering (ECE) Professors K. J. Ray Liu and Min Wu have been named 2019 Fellows by the National Academy of Inventors (NAI), joining the ranks of some of the nation’s most prestigious and creative academic inventors.

According to the NAI, its Fellows Program “highlights academic inventors who have demonstrated a spirit of innovation in creating or facilitating outstanding inventions that have made a tangible impact on quality of life, economic development and the welfare of society.” Data collected by NAI shows that NAI Fellows hold more than 41,500 issued U.S. patents, which have generated over 11,000 licensed technologies and companies, and created more than 36 million jobs. Also, over $1.6 trillion in revenue has been generated based on NAI Fellow discoveries.

"I am honored to be named an NAI Fellow for the recognition of wireless AI technology that my team and I are developing,” said Liu, who is a Distinguished University Professor and the Christine Kim Eminent Professor of Information Technology in ECE. “[This technology] has been deployed as Belkin's Linksys Aware for WiFi sensing for home security to over 150 countries worldwide. I am excited that we are making a real impact to the world with our technology.”

Professor Liu, who joined the UMD faculty in 1990, is the leader of the University of Maryland Signal and Information Group. Liu's main fields of study are in signal processing and communications. As part of multiple teams, Liu has three times received the University’s Invention of the Year Award: in 2013 for Time-Reversal Division Multiple Access for Wireless Broadband Communications, in 2011 for Active Sensing for Dynamic Spectrum Access, and in 2004 for Coding Techniques for Maximum Achievable Diversity in Space, Time and Frequency for Broadband Wireless Communications.

Prof. Liu has been recognized internationally with numerous awards, including the IEEE Signal Processing Society 2009 Technical Achievement Award, IEEE Signal Processing Society 2014 Society Award – the highest award bestowed by the Society, and the 2016 IEEE Leon K. Kirchmayer Technical Field Award on Graduate Teaching and Mentoring. For the IEEE 125th Anniversary in 2009, he was recognized as one of seven scientists who the organization believed would significantly contribute worldwide to the way humans interact with machines, the world and each other. He has been recognized by Clarivate Analytics Web of Science as a Highly Cited Researcher.

As an entrepreneur, in 2013 Liu founded Origin Wireless, based in Greenbelt, Md. This start-up company develops wireless AI analytic technologies for smart home systems. It invented the world’s first centimeter-accuracy indoor positioning/tracking system and the company’s patented TRM (Time-Reversal Machine) Technology has been applied to motion detection, home security, well-being monitoring, human breathing monitoring and fall-down detection without wearables or cameras. This technology can be used in many applications from Wi-Fi smart homes to smart tracing, with high performance, low cost and ease of use. The TRM technology won the Combined Exhibition of Advanced Technologies (CEATEC) Grand Prix Award after its worldwide debut. Since then, in partnership with industry companies such as Qualcomm and Marvell Technology Group, TRM technology is being deployed to millions of users worldwide in a variety of applications.

Among many pioneering works, Liu has also revolutionized wireless communication with the concept of cooperative communication by improving communication capacity, speed and performance; reducing battery consumption rates to extend network lifetimes, increase throughput and stability and expand transmission coverage area. Liu also is a Fellow in both the American Association for the Advancement of Science (AAAS) and the Institute of Electrical and Electronics Engineers (IEEE).

“I am honored to be named a Fellow of the National Academy of Inventors, and feel very much blessed by having supportive inventors as mentors and collaborators along the way. Not only do I find the joy in discovery and innovations that can make a positive impact on the society, I also appreciate the opportunities to give back by sharing the invention process with students and helping them become future inventors,” said Wu. She joined the ECE faculty in 2001, and is a University Distinguished Scholar-Teacher and Associate Dean for Graduate Program in the Clark School.

Wu, who also is affiliated with the university’s Institute of Advanced Computer Studies (UMIACS) and Institute for Systems Research (ISR), leads the Media And Security Team with main research interests in information security and forensics, sensing analytics, and multimedia signal processing.

Wu holds influential patents in multimedia security and forensics. Major industry players frequently cited her patents, including a number of Fortune 500 companies. Dozens of patents by the companies receiving the Emmy Technical awards for intellectual property protection technologies cited her patents in this area. Her experience in invention and patenting since her graduate school years and continuing at UMD brought her deep appreciation of the importance in bringing the knowledge and training of inventing and patenting to graduate and undergraduate students. She developed synergistic lecture material to provide an introduction to patents and invention process together with the technical knowledge on copyright protection for digital content to her graduate and undergraduate classes at UMD. Thanks to her nurturing, nearly all of her doctoral students have been co-inventors with her in a patent or patent application, and many continued to be inventors in the technology frontier.

Among her many previous awards and recognitions are a National Science Foundation (NSF) CAREER Award in 2002, an MIT Technology Review TR100 Young Innovator Award in 2004, an Office of Naval Research Young Investigator Award in 2005, a Computer World “40 Under 40” IT Innovator Award in 2007, a leader of University of Maryland Invention of the Year award winning teams in 2012 and 2015, recognition as the IEEE Distinguished Lecturer in 2014, and an IEEE Harriett B. Rigas Award honoring outstanding woman engineering faculty in 2019.

Wu was elected Fellow by both the AAAS and the IEEE for outstanding contributions to signal processing, multimedia security and forensics.

Several of both Liu’s and Wu’s previous inventions have also been honored by the Jimmy H.C. Lin Innovation and Invention awards established by the late Jimmy Lin, a beloved, longtime Professor in the ECE Department, who was a prolific inventor and champion for invention and innovation, and who Wu says is “a strong inspiration” for her work.

The NAI was founded in 2010 to recognize and encourage inventors holding patents issued from the United States Patent and Trademark Office (USPTO); enhance the visibility of academic technology and innovation; encourage the disclosure of intellectual property; educate and mentor innovative students; and translate the inventions of its members to benefit society. 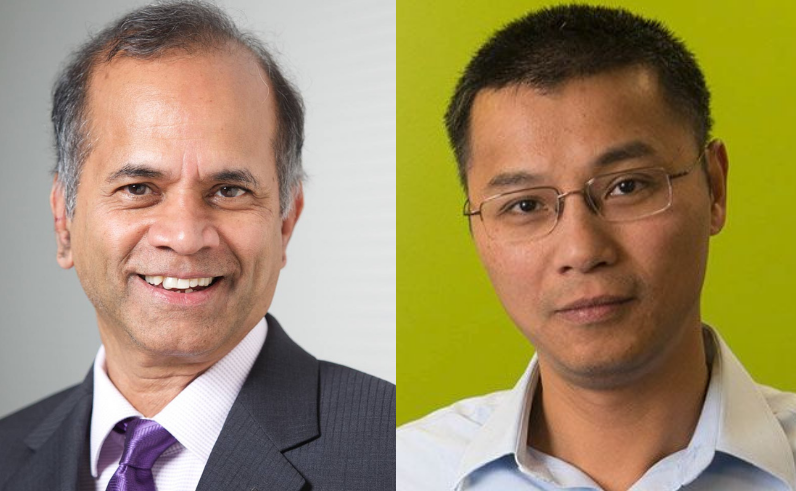