The University of Maryland student group, Terrapin Hackers has taken the hackathon world by storm lately. Winning major competitions like MHacks at Michigan State has inspired great confidence in this team of students and fueled the team’s desire to maintain a strong standing in Major League Hacking (MLH).

During a six-week season of hackathons this fall, the standings were tight going into the final hackathon. It seemed as if Carnegie Mellon had taken first place following HackMIT and that four schools would be left to vie for second and third place. Maryland was one of those four and was in tight contention with Columbia, MIT, and Rutgers. With the competition so close, SendGrid, a generous sponsor, provided funding for Terrapin Hackers to bus to the final hack. Terrapin Hackers didn’t charter just any bus to Rutgers, they took an official University of Maryland athletics bus!

Terrapin Hackers took first place and 300 points at the last hackathon of the season, HackRU, and earned another 50 points for the Best Hardware Hack. Rutgers came in at third place earning 100 points and another five individual hacks. This tied UMD’s Terrapin Hackers and Rutgers at 350 MLH Points based on merit. Because the teams couldn’t win on merit alone, the tie-breaker was attendance.

“Even though the Terrapin Hackers organization may have organized the trips and the outreach efforts, it's the terrapin hackers who deserve the credit on this one.”

After calculating the merit points, the MLH Commissioner realized that with the points for attendance, the spread between the two teams was only 20 points. Since it was too close to call a clear winner, representatives from each school were brought in to review their points from past events.

Shariq Hashme, the president of Terrapin Hackers is a junior in the Electrical and Computer Engineering Department who double majors in Computer Science. He is very proud of the Terrapin Hackers efforts in the first season of the MLH. Hashme said, “MLH is like the NFL for hacking or building cool things quickly. Since Maryland beat schools with well-established hacking communities like MIT, Columbia, and Rutgers, in the first semester of participation in the MLH, our success shows the quality of the students at our school. It was a tough competition - we were in third place right up till the very end, and it was quite spectacular how we pulled up to first and 180 points above second place.”

Hashme also proudly gives credit where credit is due. He said, “Even though the Terrapin Hackers organization may have organized the trips and the outreach efforts, it's the student hackers who deserve the credit on this one.” 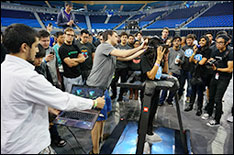