Liu Elected to IEEE Board of Directors

IEEE, an association dedicated to advancing innovation and technological excellence for the benefit of humanity, is the world’s largest technical professional society. It is designed to serve professionals involved in all aspects of the electrical, electronic, and computing fields and related areas of science and technology that underlie modern civilization.

The organizations roots date back to 1884 when electricity began to significantly influence society. At that time the only established electrical innovation was the telegraph which ahd been connecting the world through data communications faster than the speed of transportation. The telephone, the onset of electric power, and light industries were fledgling and getting underway.

In the following decades, the social roles of the technologies under IEEE’s auspices continued to spread worldwide and affect more areas of people’s lives. The professional groups and technical boards of the predecessor institutions evolved into IEEE societies. By the early 21st century, IEEE served its members and their interests through 38 societies; 130 journals, transactions, and magazines, more than 200 conferences annually; and 900 active standards.

As technologies and the industries that developed them increasingly transcended national boundaries, IEEE has kept pace. It is now a global institution that uses the innovations of the practitioners it represents to enhance IEEE’s excellence in delivering products and services to members, industries, and the public at large. Through its global network of geographical units, publications, Web services, and conferences, IEEE remains the world's largest technical professional association.

Liu will serve as the Division IX Director representing the following IEEE societies:

Division IX has about 35,000 members and IEEE approximately 450,000 members. More information regarding the election can be found on the IEEE website,  http://www.ieee.org/about/corporate/election/election_results.html. 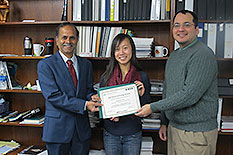