ECE students, Justin Bare, Saara Khan, and Phil Sandborn, were three of seventeen students in the A. James Clark School of Engineering to be awarded a National Science Foundation (NSF) Graduate Research Fellowship. This number doubled since last year. The Graduate Research Fellowship Program recognizes and supports outstanding graduate students in NSF-supported science, technology, engineering, and mathematics disciplines who are pursuing research-based master's and doctoral degrees at accredited US institutions.

Justin and Saara previously participated in MERIT-BIEN and TREND, a unique, 11-week summer research program for top undergraduate engineering, mathematics, and physics students. They both received accolades for their work— in 2010 Saara won Best Overall Project for TREND and in 2011 Justin won Best Overall Project for MERIT. Electrical and Computer Engineering Department’s Maryland Engineering Research Internship Teams (MERIT) summer research internship program in 2010 and 2011 both winning accolades for their research. All three students served as department leaders. Phil and Justin both served various student groups on executive boards, including IEEE and HKN.

Bare will continue his studies in Artificial Intelligence at Washington University. He attributes his desire to continue his education to his professors’ abilities to impart their knowledge in a fun, enthusiastic, and engaging way. “My experiences as an undergraduate in ECE, both through course work and research opportunities, have inspired me to pursue my education further.” Saara Khan feels that the excellent mentorship she received as an undergraduate fueled her success. She says, “If you have the initiative and motivation to do well in ECE, you will. Professors recognize that. Her experiences through the TREND program led her to publish a paper as first author based on her research with Professor Patrick O’Shea. Khan headed to Stanford to continue her studies in electrical engineering, while Sandborn joined her on the west coast at the University of California, Berkeley. He is currently studying silicon photonics under Ming Wu. This niche research area is relatively new. Philip plans for a career in academia. He chose Maryland as his starting point because of its technical strength and diversity in education. 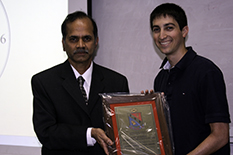