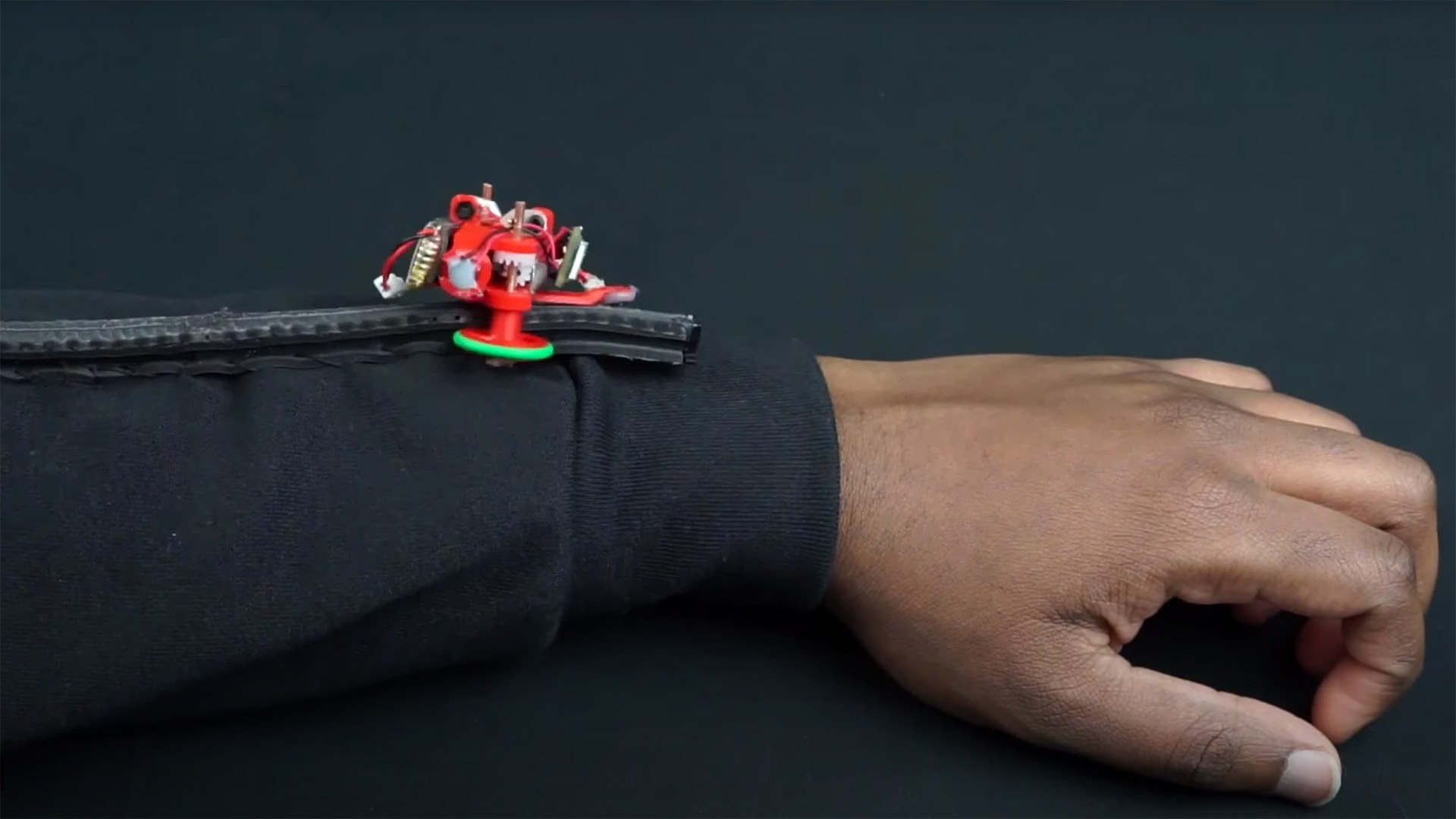 Tiny, robotic wearable sensors developed by UMD researchers can move around the body on flexible fabric tracks to provide movement tracking from wherever they are most effective.
Photos courtesy of Small Artifacts Lab

Fitness trackers and smartwatches are widely used to monitor health, activity and exercise, but they’re pretty sedentary themselves. They stay strapped on your wrist or clipped to your clothing despite the fact it’s more effective to monitor different areas—your upper body for breathing, for example, or your wrist to track typing or writing.

Now, researchers at the University of Maryland are putting wearable sensors on track to do their best work—literally—with a miniature robotics system capable of traversing numerous locations on the human body.

Their device, called Calico, mimics a toy train by traveling on a cloth track that can run up and down users’ limbs and around their torso, operating independently of external guidance through the use of magnets, sensors and connectors. Their paper describing the project was recently published in the ACM Journal on Interactive, Mobile, Wearable and Ubiquitous Technologies and presented at UBICOMP, a conference on ubiquitous computing.

“Our device is a fast, reliable and precise personal assistant that lays the groundwork for future systems,” said Anup Sathya M.S. ’21, who led Calico’s development for his master’s thesis in human-computer interaction. Sathya is now a first-year Ph.D. student in computer science at the University of Chicago.

Most wearable workout devices are limited in the type of exercises they can monitor, but Calico is versatile. For example, it can track running on a user's arm, move to the elbow to count push-ups, to the back for planks, and then to the knee to count squats.

And unlike other devices, Calico moves quickly and accurately without getting stuck on clothing or at awkward angles. “For the first time, a wearable can traverse the user’s clothing with no restrictions to their movement,” said Huaishu Peng, an assistant professor of computer science who was Sathya’s adviser at UMD.

Peng, who also has an appointment in the University of Maryland Institute for Advanced Computer Studies (UMIACS), sees a future in which mini wearable devices like Calico will seamlessly integrate with humans for interaction, actuation and sensing.

He recently took Calico in a creative direction by establishing a new collaboration with Jonathan David Martin, a lecturer in Immersive Media Design; and Adriane Fang, an associate professor at the School of Theatre, Dance, and Performance Studies.

The interdisciplinary team is combining dance, music, immersive media, robotics and wearable technology into a novel and compelling series of interactive dance performances that are choreographed in real time through Calico.

First, Peng’s research group programmed Calico to instruct a dancer to execute specific movements using motion and light. Then, using their smartphones, the audience gets to collectively vote on how Calico should instruct the dancer.

The project is being funded with a $15,000 award from the Arts for All initiative, which leverages the combined power of the arts, technology and social justice to make the University of Maryland a leader in addressing grand challenges.

“The idea is to explore the dynamics and connections between human plus robot and performer plus audience,” said Peng. “In this instance, Calico will and act as the ‘mediator’ to broadening art and tech participation and understanding.”

Thank you to Maria Herd for the article. Read the original version of this story on the Maryland Today website.